A steam drum is a standard feature of a water-tube boiler. It is a reservoir of water/steam at the top end of the water tubes. The drum stores the steam generated in the water tubes and acts as a phase-separator for the steam/water mixture. The difference in densities between hot and cold water helps in the accumulation of the "hotter"-water/and saturated-steam into the steam-drum.

The steam drum is the primary interface between water and steam. In a coal-fired plant, boiler feedwater passes through the economizer and into the drum where the steam separates from the feedwater and is drawn off to the superheater.Maintaining constant liquid level in the upper part of the steam drum is necessary to provide the proper quality of steam. Instrumentation must withstand high temperatures and pressures.

The working conditions of drum are complex and the consequences of accidents are serious. It is necessary to strictly control the chemical composition, mechanical properties and welding and processing quality of material used in drums, and to pass a series of strict tests. The cylinder is composed of a cylinder body and a head.

1. Cylinder:refers to the cylinder part of the drum. Its inner diameter and length are related to the circulation mode, boiler capacity, steam parameters and the structure of inner equipment. Steam drum is usually rolled on multi-roll reel machine. The drum wall of subcritical pressure boiler is too thick to be pressed on giant press.

4. The steam after secondary separation is finally cleaned by steam, and gravity separation is carried out by using the density difference of water, which is the third separation.

5. After three separations, the steam meets the steam quality standard, and leads to the platen superheater from the saturated steam pipe at the top of the drum.

Primary steam-water separation removes nearly all the steam from the water so that very little steam is recirculated from the drum bottom towards the heated tubes through the outlet connection (downcomer).

At secondary separation, steam is passed through a secondary stage of separators or scrubber elements (usually closely spaced corrugated parallel plates) for final water droplet removal. Steam is then exhausted through various ports. 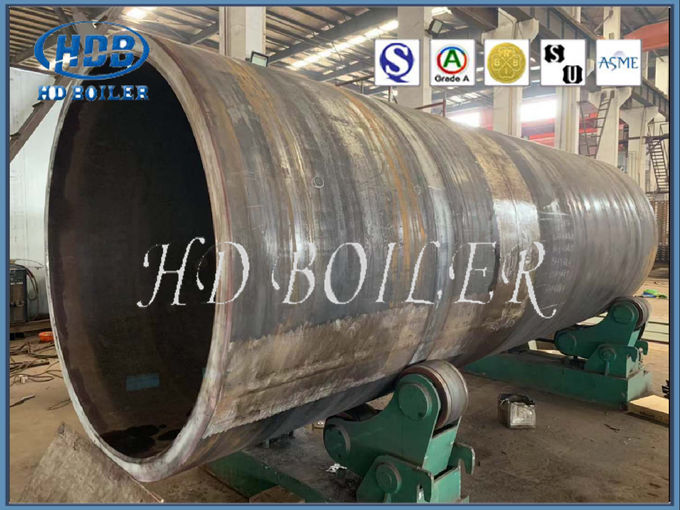